Bladed out Main: used by Burch.  Increased luff curve, flattened the top half, pulled draft forward up top, opened leech up top.  Did some magical stuff to the panel layout with catenaries and weft alignment to maintain design shape with higher sheet loads. For lighter and hulls with less form stability.

After sailing the High Sierra Regatta a few weeks before the Nationals, I realized there were some needed improvements that could be made to the Ullman Mercury sail inventory.  The boats, masts and crew weights can be so different, it doesn’t make sense to be sending the same design to each customer.  The story below is the adventure of building nine new sails, including 2 new designs with very little advanced warning.

Uncle Kenny Dair snapped his rig backing into a tree at the High Sierra Regatta 3 weeks before Nationals.  Kenny and Raab found a new mast lying around and didn’t have time to dial one in that would be the same as the one that broke.  While practicing they found the new mast to be far more noodly than their old one.  They could not get the thing to stop bending and the luff curve was maxed out by the mainsheet tension before they even touched backstay or vang.  The slightest touch of the backstay or vang resulted in overbend wrinkles and the draft in the standard cut main borders on drifting too far back from mast bend even before that point.  (Watch the effect of tensioning your cunningham, does it add luff tension and pull draft forward or increase mast bend and send it even farther back?) 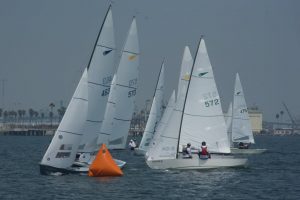 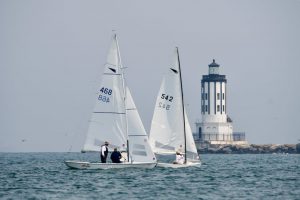 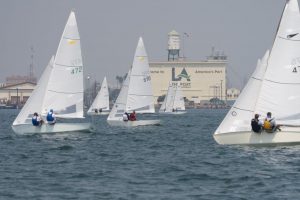 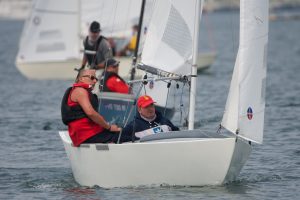 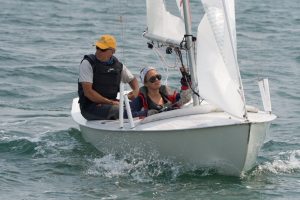 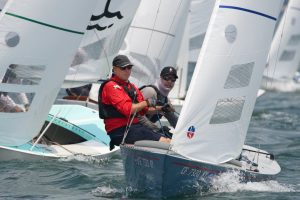 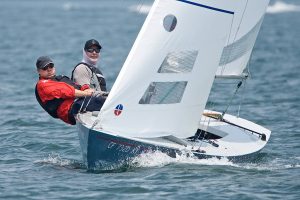 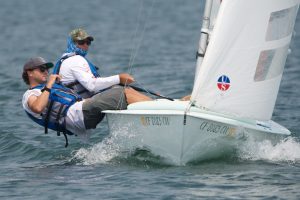 Aftersailing Huntington Lake with Chris Messano on Frenzy the ideas for the next generation of Ullman Mercury designs were launched.  He wanted a deeper sail with more luff curve to add to the designs depower range.  He asked us to be careful not to hook the leech too much in the bottom which happened in the past when he asked other sailmakers for a deeper cut.  Overall the biggest thing he wanted was more power which he always found better for his style of sailing and has had a hard time finding a sailmaker that delivered.

We delivered what I believe is the most powerful Mercury mainsail ever built.  Shaum Sinawi and John Kostecki chatted with me on the phone early on in the development.  Shaum called to order sails and I got him up to speed with the two new designs we were developing for the 2020 Nationals; the full cut for Frenzy and the bladed out main for Jade.  Shaum, John and I chatted on the phone about how with their 400lb crew weight, and flatter rockered Nunes hull the new powered up luff curve sail could be a good option and they went for it.

While Kenny and Raab were practicing with them they got into discussing sails and talked Kenny and Raab into ordering another new main, the new full luff curve model to match their new noodle of a rig.  Sometimes things are just meant to be.  Loft production had accidently cut an extra full main with no order yet.  So, two lucky accidents set Kenny and Raab up with a perfectly matched new mast and main. They went on to outpace everyone and win the event with the new design.

Kostecki and Shaum placed an easy second also putting the new design to good use.  They were stoked on the sails, I was pressing them for feedback but they seemed to think there wasn’t much that needed changing.  Chris Messano shared that he felt the new sail was too radically different from what he was used to, his rig being a little stiffer, didn’t agree with the added luff curve as easily.  Not wanting to retune his rig and dial in a new set one day before the event he went back to what he was used to.

We have learned a ton from all the last minute developments going into this regatta and have taken a huge step forward.  The new mains are beautiful and got the job done taking a 1,2,4 in the event.  The luff curve matches well but is definitely on the end of the spectrum, the most any Mercury sail can effectively have.  They look like a Laser main at the dock, but come right to life as soon as you trim in the main.  The biggest plus is they hold their design shape far better into the top end of the wind range, which is one of the primary things we were shooting for.  The next changes will be to dial back the luff curve just slightly redistributing the same shape back into the broadseam.  Keeping the same flying shape on average but making it slightly more user friendly, not so sensitive to needing trimming attention perfecting the mast bend in lighter air.  A few tweaks to luff tape contraction in the build, luff, leech and girth sizes will result in a new 2020 Ullman Main that will easily be the fastest AP sail built to date.

The other design story from the event was the 24 hour sail, designed and built in less than a day, a new heavy air main for Mike Burch and myself on Jade.  Mike already had a great inventory of new sails, it’s only in the higher wind speeds with us being a tad light and his Schock built boat having more rocker and less form stability that we seem to find ourselves out of our range and slowing down.  I knew we had to get the customer’s sails done first, especially if we were the only ones looking for a flatter sail, before we could even ask for a new design.  The forecast had also turned light and we were entirely confident in our light air inventory, so it ended up on the backburner.  Wednesday afternoon a few boats were tuning up, it was breeze on, we didn’t even bother sailing not wanting to blow things out, including Mike’s rebuilt leg.  It was far windier than the forecast for the day.  I checked with the team and everyone said we could get it done.  I gave Bruce Hollis from Ullman Sydney Australia the go ahead on the design.  While we were sleeping he went to work and had a new design landed at the plotter first thing Thursday morning.  The team got it done and it turned out to be everything we asked for and more.  Using the same luff curve as the other new design, but flattening and twisting off the top while pulling the draft forward, I wanted to blade out the top without changing the bottom much to redistribute power down low for better righting moment, all without distorting the design shape. (They decided against the mid luff cunningham grommet I suggested, probably for the best :/ ) It did exactly that, the sail was perfect, no changes needed.  It was really very cool to see and use.  When you pull on the depower controls, everything reacts exactly as it’s supposed to, the shape gets better as the sail depowers, it was wild.

The first race was the windiest of the regatta, towards the top end of our old competitive wind range.  We had a good start and were untouchable from then on.  It was the best the boat has ever felt.  We went on to win the race too easily, unchallenged.  It was so weird it messed with our heads and I went on to clusterbomb us over early out of the next start and take us out of the regatta in only the second race.  We couldn’t have been happier with the sail anyway and had a blast in the event overall.  We managed a slight comeback on Saturday sharing low score for the day to wrap up the event.

Thanks to the Mercury Class and Cabrillo Beach Yacht Club for putting on such a great event.  I’ve always had an awesome time racing in the fleet.  Mercurys are likely the best combination of fun, affordability and difficulty out of any West Coast One Design fleet.  Not to mention the allure of their history.  We can point you in the right direction if you’re looking to get involved.

Thanks to all the competitors who choose to race with Ullman Sails.

Chat with Greg Dair our One Design Coordinator and avid Mercury sailor to optimize your setup for the next event.