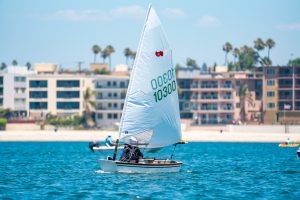 Ullman Sails notched in another Class Championship win in the Naples Sabot this summer.  Jeff Lenhart’s handcut designs have proven themselves again in 2021 winning not only the Sabot but also the Cal 20 and Lido 14 Nationals.

Greg Dair from Ullman Sails One Design caught up with Sophia Devling to see what went into her Sabot Nationals win.

All photos by Simone Staff

What can you tell us about the regatta?  How many boats were there?

I think around 140 I’m not exactly sure.

So there’s a qualifying day how do they split it all up?

Ya, there’s one qualifying day and that puts you into your fleet gold silver bronze or iron.  For the last two days you just race in your fleet.  The qualifying scores don’t count for anything other than to qualify you and then the regatta starts from scratch after qualifying day. 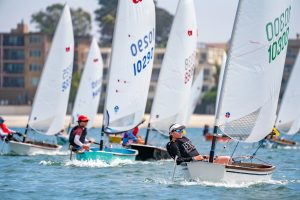 How’d did you manage to pull off the win?

I think staying calm and looking for opportunities was really important.  In the last race any one of the top 6 boats could have won.  I noticed a really big lefty coming down the course, saw it happen so I tacked and hitched out towards it and tacked back on the lift.  I rounded fourth and made it up to second.  I think staying really calm even though it was really stressful was really important.  In the end I only won on a tiebreaker so every point really mattered.

It was in Mission Bay?  Have you raced there before?

Yes I have quite a few times actually, in sabots.  It’s actually my favorite place to sail sabots because it’s really open and there’s good breeze, flat water and it’s a little shifty and tricky too.

Why do you go with Ullman as your sabot sailmaker?

I’ve only ever used Ullman Sails in sabots so it definitely felt like the way to go.  I think the Ullman Sails are easy to tune and manipulate into the shape you want.  I like to adjust my controls a lot and I think it’s really easy to see what your doing to the sail just by pulling on a little bit of outhaul for example.

You used the same sail for four nationals!?

Yes, it’s still a great sail in great condition.  I just used it only for Nationals though, nothing else in between, it’s a 3 day regatta plus the practice day so it’s only 16 days on the sail, and I treat it really nice. 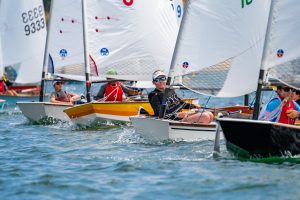 So what’s next for you in your sailing?

Im focusing on High school a lot this year and 420s, International 420s and Club 420s.  I go to Newport Harbor High School and race on their sailing team.  Nationals was my last sabot regatta so it was nice to go out with a win.

Awesome thanks for chatting with us and congrats on the win!

We have the highest confidence in all designs Jeff Lenhart has produced for the core classes that he has put the most development into.  There seem to be some timeless principles he puts into his work that can deliver success time and time again year after year with very little change needed.  There is no need to mess with success.

We do however always carry an open mind towards design development and optimization.  There are some different design techniques used in other sails in the class that also perform well in certain conditions.  We do not limit ourselves in the number of designs we offer our customers.  If we test a new design and it tests well, it will be offered as a new product.  The team at USNB is involved in coaching the local sabot class and we do have plans to test new sails.  Most likely instead of changing the Lenhart design, we will test a new design altogether and if it tests well we will offer both.

Some expert sabot sailors (including adults well versed in sailing at large) have previously asked Jeff to try modifications to luff curve and other aspects of the sail.  By and large they usually fail to outperform Jeff’s original classic design.  I won’t be surprised if after all the work and testing the conclusion still is that the Classic Lenhart handcut is the best all purpose sabot sail across a surprisingly wide range of weights and abilities.  That would suggest the sail goes best when designed to be optimized to the boat itself regardless of weight and ability.  We are not saying that is or isn’t true.  We have plans to learn test and if possible improve our products.

To stay up to date check in with