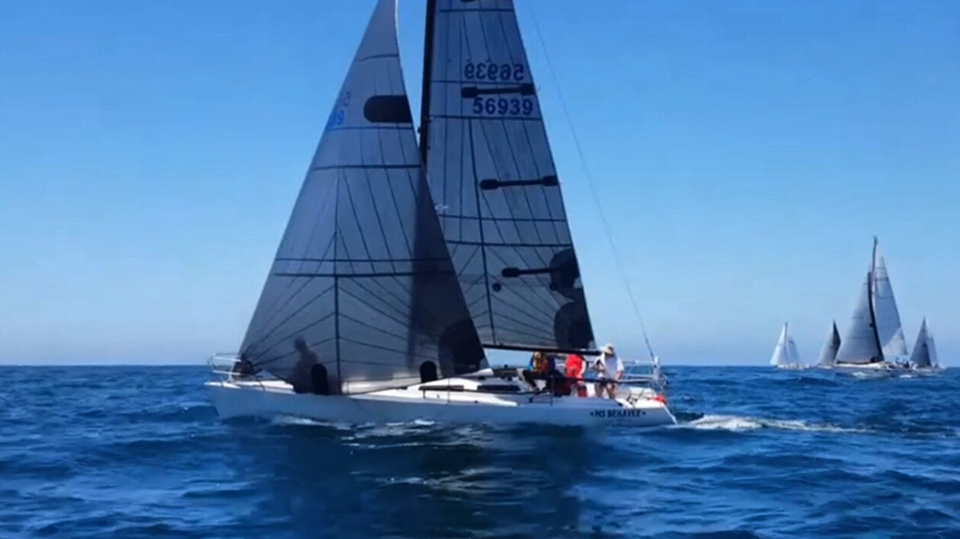 This year’s SB2KH race was another good one. Friday afternoon winds were as advertised but unfortunately for most of the fleet diminshed after sunset. The racing fleet was solid and competitive even with many of the usual participants away having competed in the TransPac Race which started almost mid-month this year. There would be no turn n burns this year.

Those who did race were treated to normal tight reaching in moderate winds to Anacapa Island, challenging light air down or around the back of the island, then a dash to the coast. Those who got to the coast early enough with wind could go inside and across Santa Monica Bay, whereas the later boats who had any wind benefited by cutting across the top of the bay. Not usually the best route but good this year.

I was on Bobby Walker’s stock Hobie 33 “Ms Behaver” and sailed fast & well to earn 1st Class ULDB C and 4th Overall in the 78 boat fleet.
Off the starting line we flew the GPL 155% genoa and fairly quickly transitioned into the Ullman Code 1A with the PXB Genoa Staysail under it. We kept this fast combo up all the way to Anacapa in the building and lifting breeze.

It turned out to be light and shifty down & around the backside with just the 1A and even hoisted the 155% at one point.
We chose to exit the island on the left to get into the breeze we could see. With solid breeze a code 2A was hoisted to run deeper and off we went again. Close to Pt Dume (Pt Doom) we didn’t find more wind but less! and gybed out with an awful angle in a bad chop.
Modified sister-ship “Captain Sluggo” was just outside of us and going better so we joined them, chasing them towards the finish on a light air starboard reach. Our finish time was around 10:45pm. A surprisingly 7.75kt average for the race!

Congratulations to all of them and to all of our customers who competed.