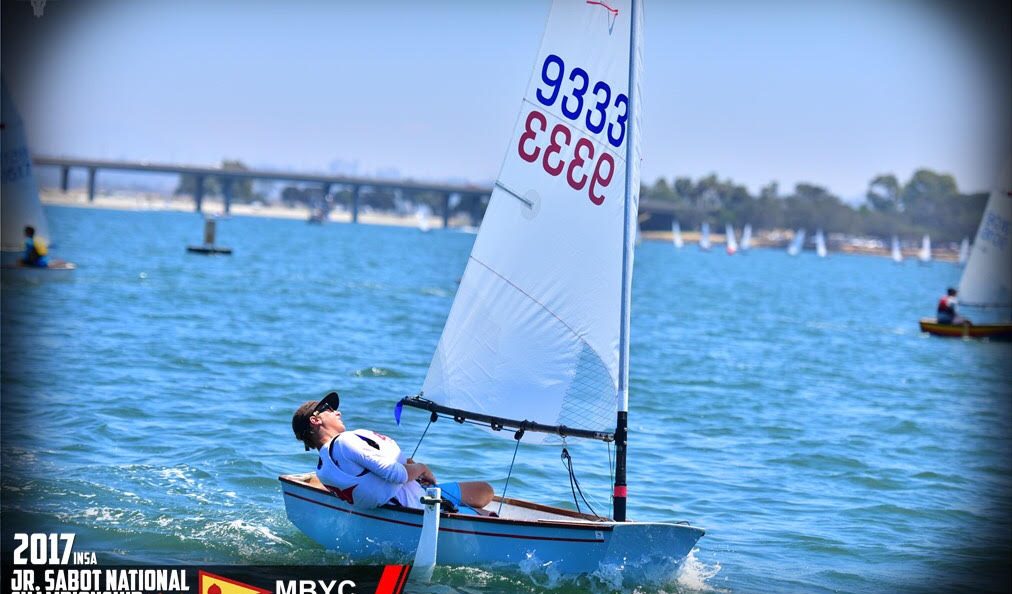 Last weekend Jake Mayol from the Bahia Corinthian Yacht Club won his second Sabot National Championship in three years. He took the time to sit down and chat about what went into his win, the support behind his program, and what his future plans are.

Jake, how old are you?

How did it feel to get your second Sabot Nationals in three years?

“Its cool to win two, bummer to not win last year, but I was happy to win this years. But that’s probably it for me.”

What was the difference from last year to this year?

“I think that last year I went in to the regatta with too much confidence and I didn’t perform well in the qualifying round, and I was bummed about that. This year I just went out there with the attitude of taking it one race at a time and not get ahead of myself. Just sailing my own race, and keep my head down.”

Talk about the support you got from Bahia Corinthian Yacht Club

“I was fortunate to have Cameron Mclearon and Mark Gaudio coaching me. They are two great coaches who have similar coaching styles. I’d say Cameron helped me a lot with the mental side of the regatta – moving on after a bad race, and keeping it in a “one race at a time” mentality. Mark did an awesome job making sure I was sailing my boat well, and going fast.”

Can you talk about what role Ullman Sails played in your Sabot success? You used an Ullman Sails SF-1 to win the regatta, which was the same sail you used a year ago.

“Yeah, Ullman Sails really took the time to come out and explain to me why the sail works the way it does. Jeff Lenhart taught me how to properly trim and use the sail to maximize the performance. Ullman Sails is just made up of a bunch of great guys, who are always willing to help. They were awesome through all of my recent Sabot years.”

You say you’re done with the Sabot, where are you going from here?

“Recently I have been sailing the Nacra 15.”

Is there any carry over from the Sabot to Nacra, certainly not in performance but in tactics?

“No not really, certainly from a performance stand point the catamaran is a different game, but the fundamentals are similar, you still have to get off the line going full speed and get the first shift.”

Ok, now for some fun questions, what is your favorite sport other than sailing?

“I love to Surf; I actually just came from the beach.”

“Either Jimmy Spithill or Ben Ainsle.”

Who did you root for in the America’s Cup?

Would you rather have the ability to hit a golf ball 350 yards or be able to make a full court shot nine out of ten times?

What is a goal you have in sailing for the next six- months?

“Qualifying for the Youth Olympics in Miami in a few months time in the Nacra.”

What about the next four years?

“It would be great to qualify for the youth worlds three times.”

Thanks for your time, and good luck, we are rooting for you.
“Thank you for all of your support!”