Last weekend Katharine Stone from the Bahia Corinthian Yacht Club won the Sabot II North Championship. Greg Dair from Ullman Sails One Design took the time to sit down and chat about what went into her win, the support behind her program, and what her future plans are.

All Images by Tom Walker Photography 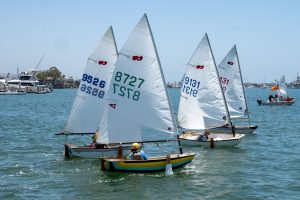 Katharine, can you explain what the Sabot II Regatta is?

The Sabot II regatta is for (the summer championship of) all the sailors that are under the age of 12.  (Katharine’s win was in the North region LA and Orange Counties)  This was my biggest regatta of the summer.

Who was your biggest competition?

Probably the two A’s in the fleet, Maddie and Sienna Nichols.

US – “What fleet are you in right now”

A few days ago, I moved to B the week before.

It seems like you’ve made a ton of progress in the last two years since I’ve seen you sail last, what do you attribute that to?

“My coaches have helped me a lot.  I’ve been stressing out a lot less.  I try to calm down and not think about what might happen.”

US – What do you think about instead?

“The moment and what to do then.” 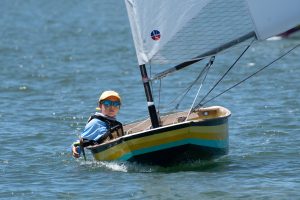 How many points did you win the regatta by?

“I’m actually not sure.  I didn’t look at the scores.”

“My dad’s friend called us when we were heading home and told us that I won.  Everyone was telling me before that I probably won.”

US – Well you had a good scoreline right.

“I won the first two and the last (out of 6) and two seconds and a fourth.”

What were your keys to success during the event.

“Well I got a lot of good starts.  I tacked on most of the shifts. And I was stressing out a lot less.”

US – That’s a pretty mature skill set to have developed at your age, how’d you do it?

“For starts I’ve been practicing a lot and it kinda ties in with stressing out less, cause I’m not stressing out if I’m going to be over or not.  I’ve been less scared to put my boat in aggressive positions. For shifts, it’s not that hard when I can see the sail luffing (tack when the sail bubbles) I started paying attention more, and looking at my sail more.”

US – Before you started did you have an idea of what tack you wanted to be on right away?

“Well you’re supposed to start on starboard usually, so I could kind of tell if that was headed or lifted, so if it was headed I would want to tack.”

How was your boat speed, did you feel fast?

“Pretty much.  I tried to always keep all my controls in the right spots”

“Mostly just over time I slowly got better with coaches telling me to pull stuff in more or let it off more.  Mostly (Mark) Gaudio.  He was coaching me at the regatta.

US – What was the best advice he gave you?

“Well he didn’t give me that much advice, but he did say in the last race that I would win”

US – (Laughter) So he just told you you were going to win?

“Ya and I ended up winning.” 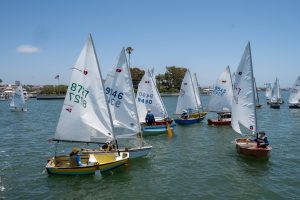 Have you thought at all about your future and long term goals?

“Well I want to keep sailing, I’m not sure what boats.  I probably want to go into doublehanded and maybe Lasers. I’ll probably be sailing for a long time”

Hows the junior program here at BCYC been going this year?

“Well we’ve been doing a lot more sailing.  A little less classroom time and we’ve been on the water a lot.  We don’t really get to do Fun Fridays quite the same as we used to though”

What’d you think about your sail for the regatta?

“Well I’ve been using it for a long time and it’s still a really great sail. First time I used it was last year.  It still looks pretty new though.  It’s been my favorite so I’m really careful with it off the water.”

“Ya, today is actually the second day of whatever regatta were doing.  It’s all the sailors from all the clubs on the bay.  Usually more than ten boats in B.  Sometimes I do good, sometimes I do bad.  I don’t really know why, maybe my attitude.”

Well thanks for catching up with us, were stoked to see you doing so well!