Huckleberry and the Ghost 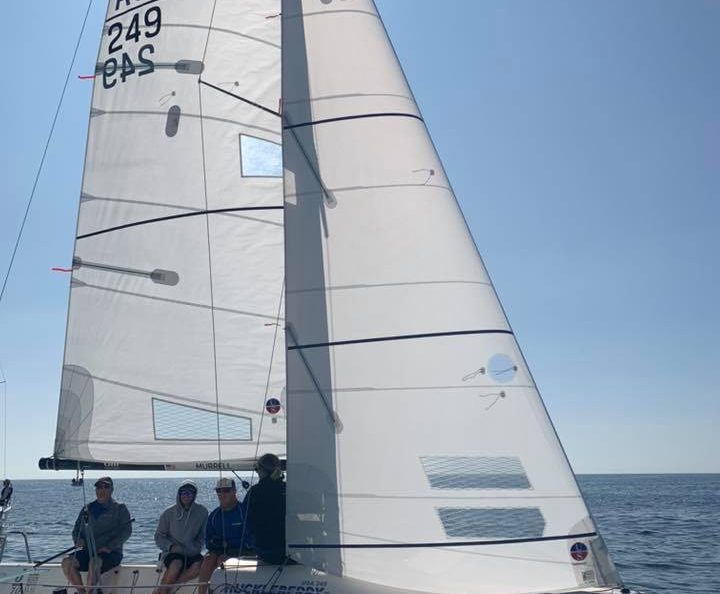 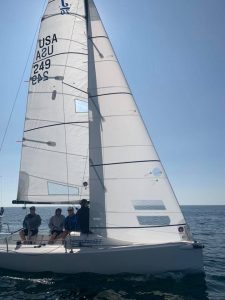 Congrats to Jay Golison and Steve Flam on “It’s All Good” for the win.

A lot to feel confident about coming away from J 70 midwinters.  Plenty of magical moments and beautiful first beats. If all the races had finished at the first mark we had the regatta won by a large margin.  Need to work on getting out of our own way and follow through around the track. Biggest positive is that we know we can easily get to the front of the fleet and position ourselves in a winning position.  Negatives are overaggressiveness and an unwillingness to consolidate the small losses.

In MDR early in the day, with light wind and a TWD of 240 or less you have an excellent chance of getting the first and or last puff and shift of the beat by working up the left edge.  If you have speed and the ability to hold a starboard tack lane in the first row off the line you’re in excellent shape and can be patient waiting to pick the perfect moment to consolidate crossing back to center up on the course.  Plenty of lefty wind ups if you go that extra 50 meters to the left.

We won the pin went full speed to the left, found a lefty puff to tack back on just under layline and comfortably crossed the fleet.  Held it together around the track to win race 1.

Had the same prestart analysis aiming for the same race plan.  We were not the last port boat in line to tack into our starboard pre start lane.  A few boats were behind us on port and tacked to leeward of us making us 4th or 5th up from the pin.  We could have hit the gas gone for hooks and ended up closer to the pin but we had a comfortable lane where we ended up.  After the gun only one boat to leeward of us had come off the line better, Golison/Flam. Eventually they tacked and crossed we rounded the top mark second.

On the downwind we did not extend all the way to port gybe lay and took an opportunity to gybe 10 – 15 lengths early of it, putting us still on the long gybe and on an angle not far off the gates.  Raab in third went all the way to port gybe lay and had better speed, more clear air and a fresher kite. He reeled us in and was probably going to end up ahead if we gybed to the right turn gate as I originally wanted.  So I opted to split taking the left turn gate, we would have rounded even or better with him had we not gotten taken out by a PHRF boat struggling to get their kite down. This is where our debrief theme kicks in: consolidate the small losses and press forward.  I think this is a lesson all racers can learn from (over and over again) it’s been a hard lesson for me as I find myself often relearning it. We should have consolidated the small loss taken the right turn gate the we originally wanted even if it meant potentially losing one place.  3rd was still a great position to be in for that point in the race and regatta. Instead I audibled our tactics and sent us around the other gate out of greed and aggression, the mistake was immediately costly as the gamble to make it in front of the phrf boat was a loss we got taken out and immediately pushed to 5th or 6th.  There were 3 individual moments all in line with this same theme where I refused to consolidate the small loss which in the end cost us the regatta. Clawed back to a 4th place finish in race 2.

Aside from a strong Boat end start line bias

A little proud of this one… Most perfect first beat I’ve had in a while.  Set up with pace to leeward of the pack fighting for the boat executed a perfect high build compressing the group to windward of us into the boat and opening a massive gap to leeward.  Perfect trigger pull and a few boats to windward of us were OCS. Held our lane across the course to the left well ahead of everyone who started to leeward. Boats to windward of us ended up tacking to the right.  We were the only team to get a good boat end start and hit the first puff and shift which came out of the top left. This set us up with a significant and extending lead for the next three laps. Golison/Flam reeled us in significantly on the final beat as the wind picked up and we were stuck too loose on the rig.  He also gained out of a small hitch to the left. Held on for the race 3 win.

Consolidating the small loss in race 2 would have had us on top of the leaderboard for day 1.

First time for me sailing the boat in these conditions.  Discovered we were lightning fast given the ability to put the bow down into a low fast mode.  Slight boat end favor. We had a good boat end start to windward of Raab who had an equal or slightly better start.  We were falling into him working hard for speed unable to go for a low fast speed build. I stopped making trim adjustments and started looking for the time to tack.  Then we settled in and found a better mode (when I stopped trying) and started gaining our lane back with great boatspeed. Rounded top mark in 2nd or 3rd with our opposition deep after they had to duck a large starboard layline cluster.  We held our position and rounded the last top mark in 2nd or 3rd. Golison/Flam had made a few gains and was only two boats behind us. A large right shift created a long port gybe to a left end (looking downwind) finish line bias. I recognized it but was hesitant to gybe onto port through the bad air and traffic with the Martin and J70 fleets both stacked on starboard lay.  Golison/Flam beat us to the gybe after we extended too far on starboard. They were laying the favored finish and probably also on our breeze slightly. We got slightly bow forward and I called for an aggressive luff attempting to force the situation in our favor match racing them to come out ahead. The failed attempt left us not only behind Golison/Flam but we lost two extra boats finishing 6th to Golison/Flam’s 3rd.  Had we just held our lane I think we would have finished fourth to their third or we even had the possibility of beating them just by doing our best for speed in the lane we were in. Again an unwillingness to consolidate a small loss turned into a much more costly mistake. The conservative sail our own race fast path would have at worst had us 2 points out of the lead (with a tie break favor) going into the final race, well within striking distance.

Settings +1 +1 ended up to tight as wind dropped further

Focused on defending second with Raab now only 1 point behind

Got the pin end start we wanted and tacked into a low fast mode on port across the righty wind up.  Raab to leeward of us on port executed a similar strategy. He tacked a bit shy of stbd lay and we had the cross and I called for a sleeper cover.  Tacking too leeward and ahead in a leebow position where the other boat is tempted to hold their lane instead of tack away. After tacking in this position you execute a gentle high mode to lull your competition into a surprising slow loss situation.  I didn’t communicate the goal well enough to Jim and we came out of the tack reaching for speed allowing Raab a clean lane to windward of us. We eventually rounded in 3rd behind Raab.

Golison/Flam had their worst start of the regatta and ended up in a situation where they could easily be handing us or Raab the lead. (especially if we had consolidated small losses earlier in the event saving a few points)

On the downwind we copped a penalty on an uneccesary overaggressive gybe call.  A slow two turn penalty had us falling deeper in the race with Golison/Flam still behind us we both appeared to be handind a late regatta win to Raab.

Raab rounded the right turn gate and sent it hard left, we made a left turn and sent it middle right.  The dieing breeze continued to clock right with a seabreeze teasing to fill. Eventually kites were set out of the right side towards the top mark.  Raab was marooned on the left tacking through nearly 180 in no wind. A 9th place finish turned out to be enough for us to hold onto second. Playing the long conservative game focusing on our speed and avoiding the penalty would have seen us easily win the event.  A further reminder to consolidate the small losses, sail your own race and let your speed do the work. 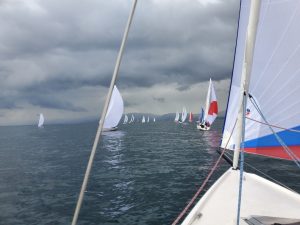 It’s fleet racing.  Focus on yourself, play for the long term, pick the high probability option, consolidate and minimize the small losses and let your boatspeed do the work.  Hopefully I will finish learning this lesson one day.

To focus on in practice;

Tactical mistakes will be sorted by regatta experience and review.  In the 100 boat fleet World Championships there is no option but to focus on the big picture, high probability, long term decision making.  It’s the small fleets where I’m tempted into bad decisions. But the lessons of this event will serve us well and lead toward even higher probability decision making.

Plenty of boatspeed gains left on the table.  We really can’t say we’ve done anything close to the appropriate level of practice.  Countless hours spent speed testing adjusting settings and improving our sail inventory will give us a significant boatspeed edge on the Worlds venue.  This is the number one thing to focus on and invest significant time into in order to reach our goals. We must plan well for it and be patient and deliberate as we put the hours in and do the science necessary to be the fastest boat on the water come July.  I’m confident in our handling, starts and tactics. Gaining an edge in terms of boatspeed is the one thing that will make the biggest difference in the big fleet. We need to go a little crazy and do literally everything that can possibly done to achieve this, which we are capable of. Both in terms of on water technique and equipment optimization.  The Ghost V2 is in the works and I expect a significant perfomance improvement from the already impressive V1. It’s time to populate the calendar with boatspeed development days and start executing the plan for the boat ensuring we have the best equipment in the fleet come Worlds.